Czech Puppets and Their Tradition, at the Columbus Museum of Art

Seeing Strings Attached: The Living Tradition of Czech Puppets at the Columbus Museum of Art (on display through August 25) makes the viewer feel the anguish of the prince who stumbled upon the room where Sleeping Beauty lay encased in crystal. Three galleries full of high-strung individuals in suspended animation! Each face so individualized; every figure shaped not only by anatomy, but by symbolism and its position in a condensed moral narrative. With the exception of some video, the show leaves all the beautiful puppets hanging along the walls or posed in groups under vitrines, sometimes in decorated settings. The show is at once disappointing and achingly tantalizing: Let the action begin! We want the show! The introduction to the show acknowledges this inherent difficulty: "Accept the invitation to this enchanting landscape that will draw you close by its strings to a world of fantastic stories and heroes...You, the spectator, are invited to bring the puppets to life..."


The show is a collaboration between the Museum (Carole Genshaft, adjunct curator), the Ohio State University (Joe Brandesky, guest curator), and the Arts and Theatre Institute in Prague (Nina Malikova, curator). Private collectors have loaned most of the materials. The many historical notes provide the narrative illustrated by the abundant, fascinating puppets themselves. The story is about puppetry that has been, since the 17th century, a way to maintain ethnic identity in an area of Europe claimed throughout history by an uninterrupted succession of authoritarian political entities: Bohemia, the Hapsburg Empire, Germany, and the Soviets. Though it has integrated puppetry traditions from all over Europe, one constant of the Czech puppet tradition was preservation of the local language, which was always secondary to the reigning power's.

Puppetry in the Czech Republic has never been simply a form of children's amusement, but has been story-telling for all ages and for many purposes. Its subjects have included fairy and folk tales; plays based on the world's great literature; operas; and topical, politically subversive works. Contemporary Czech puppetry mingles with traditional theater and is integrated into live-action film. It has emerged from the nineteenth-century work of itinerants, to domestic parlor entertainment, to become housed in dedicated, state-of-the-art theaters that now exist exclusively for this art form.

Strings Attached offers both the pleasure of seeing many instances of stock puppet characters and singular figures clearly intended as high art objects for high art settings. In the pictures above, we see a truly fearsome devil with one hoof and one foot; in the other, devils lurk behind Faustus and his red-capped servant, Kaspar. Kaspar is the Czech version of the English Punch, appearing in all sorts of settings. He's introduced here even into a homemade version of tragedy, bringing the absurd and earthy with him. 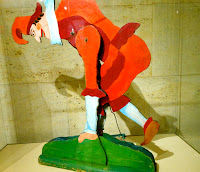 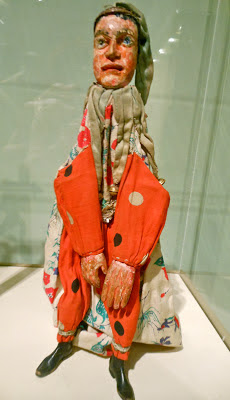 The show's other Kaspars are a wonderful bunch, each with his own personality, his own physique and expression. A 19th century hand-puppet by Jan Flaschs, Jr., (right) has the carved expression of the philosopher fool, a sage in motley, all the sadder for its drooping lack of animation. But the early, crude see-saw- motion Kaspar is a peasant all the way: No introspection here, just work and low comedy to ease the movement through life.

Another hand puppet, a stunned-looking Kaspar (left), appeared in film, not on stage: in Punch and Judy, a 1966 film by Jan Svankmajer. The film features two Kapers (Punches) who engage in a tradition of their character: They fight—in this case to the death—over a live guinea pig. The exhibit offers only a tiny photo out-take from the film, but it certainly whetted my appetite for the whole. A tradition of red puppet clowns responding to the motions of a live guinea pig? The comic possibilities in the very concept are tremendous on the face of it!

Devils are also well represented in Strings Attached. A note mentions that the story of Dr. Faustus has always been popular in Czech puppet theater, as death and the grotesque have been native aspects of the culture and folk traditions. The devils shown in this show are convincingly particularized. They are all black, not red, though this seems to suggest soot—the result of flame rather than the flame itself. They are clearly not racially black; if anything, they are bestial, having the cloven hoof, horns, and even fur-covered bodies. They go unclothed. 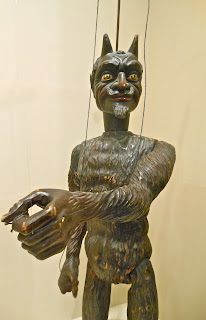 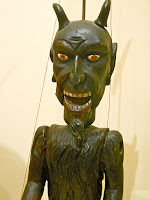 The faces of these two unattributed nineteenth century devils demonstrate something I found fascinating about all the puppets: Their faces are carved not into neutral expressions that I would have assumed the choice for flexibility. They are carved, rather, into striking, definitive attitudes. It made me stop and think how much what we see is affected by the context--how the fixed, fierce face of a devil will in fact assume in motion any number of expressions as it is introduced among other characters in different settings; through the course of a drama; and against different backdrops designed or imagined.

Petr Matasek is at the pinnacle of contemporary Czech theatre design; his puppets for a production of the Faust legend demonstrate how far puppet-making has moved into the realm of fine art. His Devil is carved in such baroque detail, with fur affixed, strategic use of red, and such fixity of limbs that we are as impressed and amazed by his strangeness as we were by the human features of the earlier devils. The artifice is so beautiful and wrong; does his awkwardness make him terrifying or sympathetic? Perhaps there's more to fear from a devil we try to understand. 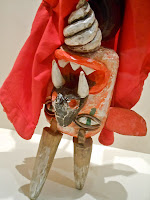 Matasek's three figures from the 2001 Johan Doctor Faustus are among the high points of the show. In addition to the puppet above, are Faustus himself and, most remarkable of all, the femme fatale, brilliant in concept and execution. Tall and drawn out, Devilyn has every trait of irresistible feminine sexuality on display and available. Her uncovered breasts are like torpedoes. Her face is brightly painted. She's wearing a satiny red skirt, pulled back even, to reveal her bush—but it's a beard. In fact, it's the devil's beard, for his inverted head forms her legs and sexual parts. It is a stunning idea, realized so boldly: I'm dumbfounded by the idea of a show with this figure in action.

There are many exceptional artists presented; people whose breathtaking skill in carving is put to the service of great fancy and insight. In the 20th century puppets, we see a great variety of forms bursting from a veritable garden of performance ideas, ranging from the rusting and rough-hewn to very polished and refined. A set of puppets for Shakespeare's Twelfth Night were executed in 1995, but designed in 1925 along the lines of the simple, clean lines of the Bauhaus aesthetic. Viola is a doll, onto whom the iconic role of the chaste, love-beleaguered mourner can be thrust.

Stylized, but in a more comical vein, are the 2005 puppets for an adaptation of Oscar Wilde's children's story, The Happy Prince. These puppets wear fabric costumes atop upholstered bodies. This gives them a warmth beyond any available to their kin made entirely of wood, or even to the hand puppets which affix wooden heads to loosely draped cloth costumes. Warmth, in general, is not a feature of the puppets in this show; few have any reassuring or inviting presence. Whether their dramas generate comforting emotions is a question I'd like to know more about. Because they are nearly all carved of wood and stylized to varying degrees, they seem indeed to be material for a medium of ambiguity, absurdity, irresolution; for hard edges and dark subjects.

But Olivia is an exceptional wooden puppet. Most of the carvers take the wood in less highly refined directions, though without being any less self-conscious in its use. Robert Smolik's rough-hewn figures for the fairy tale, The Seven Ravens, retain every mark of the chisel. In the story, a mother's curse transforms her sons into ravens, who are redeemed by their sister's persistence and love. The roots of such a story in folklore and archetype make such raw handling of the material seem particularly right—compared especially to the high art Shakespeare Olivia, painted and polished, above. 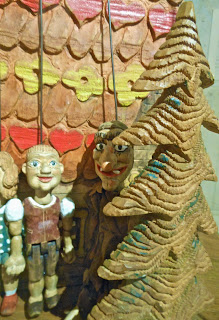 Another artist in 2003 made a revolving stage with figures for performances of the fairytale of Hansel and Gretel. Again, the artistry is great and the carving is beautiful. It is rhythmical and precise, by the manner is rough. The handling of the material itself "sets the stage" for the beloved story of innocence and power claimed.

Strings Attached is an art show giddy with an abundance of beautiful material, but it is also a show about stagecraft. While one misses the action and longs to sit and laugh or cry over the multitude of stories inherent in the three galleries, the compensation is the fascinating opportunity to glimpse playmakers' decisions about styling, costuming, and even about set design. It's a rare, multifaceted, and absorbing show. It's wonderful: full of wonders.
All photography by the author.
Posted by STARR REVIEW, New Edition at 3:47 AM