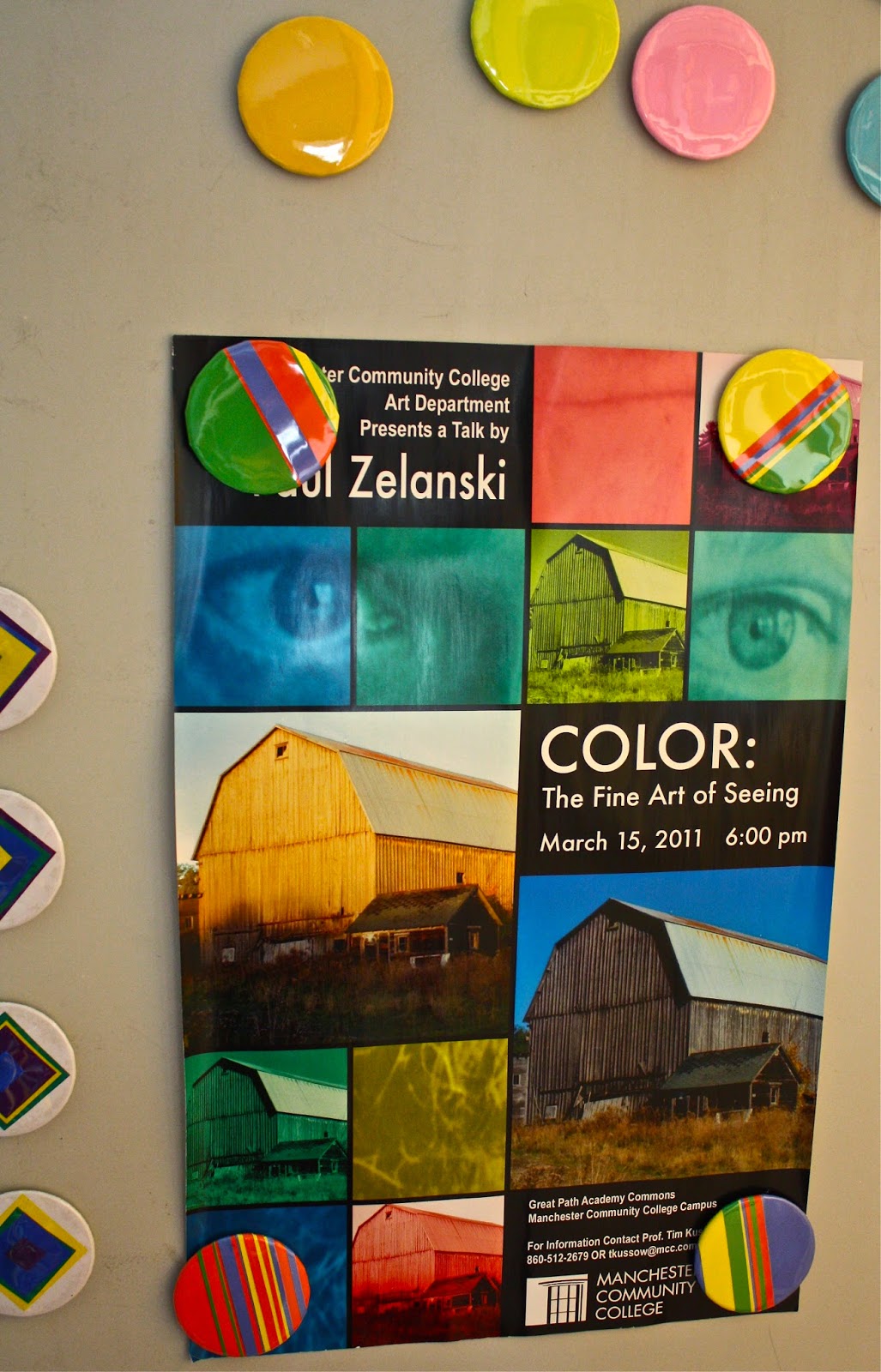 When I was recently planning a trip to New England, I asked a mutual friend for an introduction to artist and retired University of Connecticut professor, Paul Zelanski. It was a beautiful fall day when I arrived at the bucolic homestead where Zelanski and his artist wife, Annette Zelanski, raised their three children and she now raises chickens. Yellow and russet leaves were still clinging stoutly to the trees though the flowers were done, dried and gone to breaths of their former selves.

The Zelanskis welcomed me as if I were a young relation whose carelessness of familial duty was forgiven in the pleasure of her simply turning up at all. Where had I been all this time? For my part I felt the same: Where had I been? How could I have missed out on such warmth and power all these years?

Now in his 80's (he was born in 1931), Zelanski's body has taken the battering of years. His movement suggests to the observer the limitations of a well-used frame. But the body is controlled by a will that long ago dealt with and surpassed the vagaries of flesh. His face is still decorated—a little stubbornly? a little ironically?—by the sort of beard in which Edward Lear would find nesting "Two Owls and Hen, four Larks and a Wren." Photos on his website picture a man who over the long years has had more "artistic" physical personae. Now he looks like a man beyond style, whose commitment to art has turned him inside out and burnt away any need for persona. What I encountered was the quintessential Artist underneath a thin disguise of Old Cuss.

A master of collage, Zelanski has been making art since he was a seven-year-old, sitting on the steps of his apartment building in 1938, making an observational line drawing. In a stroke of luck that could prove the existence of divinity, a passing neighbor pointed out the effects that could be had by increasing and decreasing the pressure with which one drew the line—how the comparative darkness and lightness moved the form forward or backward in space. When Zelanski was ten and money was scarce during World War II, his sister's extravagant gift of a complete oil paint set clinched the notion that he would be an artist.

Zelanski studied at Cooper Union during the heyday of the New York School. He tells of a professor's frustration with his students, who were working with the female figure. He walked them over to a nearby artist's studio for inspiration, and they met Willem deKooning at work.


A fellow student invited Zelanski to board with his family, who took him in as a member of the clan. They folded him into their routines and one day took him along on an outing to Long Island to visit cousins. The family debarked at the door of Lee Krasner and Jackson Pollock.

The Korean War and a tour in the Army diverted Zelanski from Cooper Union, but he returned after the War to complete his certificate and went thence to Yale for his bachelor's in art, and finally to Bowling Green State University in Ohio for a master's in painting. At Yale, Joseph Albers had a great influence on the interest in color that has always dominated Zelanski's work.

During my visit, Zelanski gave me a tour of this vast body of work that is scattered about the property. Hundred and hundreds of framed collages are neatly lined up in plastic tubs on the floor of his studio on the second floor of the big garage. But wait: There's more! The walls of the studio, literally covered with these collages, fold out to reveal  behind them, under the eaves, even more stacked boxes of framed collages—an astonishingly large body of work.


Then, we visited the barn's hayloft, the dusty helter-skelter zone where Art and Thing merge. Here we looked at paintings and sculptures from earlier periods of his career, all under a frosting of dust. This space, like Grandma's attic, has allure for any child who wants to get lost in space and time. The pale autumnal light and early chill would add piquancy to an historical adventure in such an attic. The hayloft transformed art that was once the pride of a gallery or museum setting into a curiosity—into something that can now be seen merely in an objective light, no longer illuminated by reputation, fashion, or advertisement.

The visit to Zelanski's barn was the prism that focused my observations about the artist. On another visit, I would ask him more about those works we casually visited, even questions as simple as their dates. The two pictured about have clear similarities of design (the relationships between parallels lines and concentric circles; circles and squares, etc.) despite their differences of palettes and media; these elements can still be found in his work today. But in the barn, the past seems undated, and, dusted over, to be spared the impediment of conspicuous valuation. These works appear important and beloved—certainly not to be discarded; certainly retrievable if needed—but they are also distant literally from his current work (i.e., off in another building). Their lessons have been sufficiently absorbed by the artist that the artifacts can be thus set aside.

There is nothing precious about Zelanski's attachment to his work. His dedication is to art making itself, in contrast to pieces of art, to the art profession, or to fame and career.


Zelanski's circumstances could easily have led to a very different outlook. After a four-year, first job teaching at North Texas State University, he taught for over thirty years at the University of Connecticut. There, while his teaching and his publications met with enormous success, he was a great innovator too. He made core changes in his department, having introduced color, graphic design, and computer design to the art curriculum. Moreover, he obtained a computer graphics lab for the University from Apple Computers. All the while that he taught, his art was shown and collected internationally (Poland, Japan, the Czech Republic, England, the Netherlands, Brazil) and across the USA.

I have never been formally an art student myself, but I think that many trained studio artists are likely to know Zelanski as the author of four widely used texts on color, three-dimensional and two-dimensional design, and artists' media. His books—Color (6 editions), The Art of Seeing (eight editions), Shaping Space, and Design Principles and Problems—are classics not only in American courses, but they have been translated into English, Dutch, Spanish, French, Chinese, Japanese, and Korean.


The books testify to two defining threads in Zelanski's career: his profound learning and observation, and his commitment to teaching. It is far from given that the artist/teacher has a productive creative career. Zelanski's most distinguishing characteristics as an artist, though, are his steadiness, commitment, and discipline. The qualities he has worked hardest to instill in his students are all modeled in his own practice.

Zelanski still works in his studio every day, poring over his collages because it's what he is supposed to do and what he cannot but do. He is not obsessed; he is not driven. He is patient and ruminative. Making art is both his job and his spiritual reason for inhabiting the planet. Like a man with a lunch pail and work boots, he ascends to the space above the garage every day, sits at his table amid the finished collages, and he works on several more.


In his statement, Zelanski explains his tie to collage in terms of used and outcast materials, natural materials, and color as manifest in the shadows cast by shadows in his shallow, three-dimensional works. Indeed, each of his 5" by 7" (sometimes smaller) works is the result of a long process of intellect, instinct, and eye working together to achieve perfect poise. This poise is usually the product of interruption, separation, or the surprise of what may appear off-balance. His works draw you in; their third dimension often comes as a surprise when you  get close.

Their smallness, of course, forces the viewer to focus, which, in turn, expands them as mental and imaginative spaces. The image to the left, for instance, might be the stage set for a Greek tragedy, with its elements of strong foreground, background, spaces from which to enter and exit, and covered space at the top for curtain or a descending god. Zelanski always incorporates a natural element—usually a leaf—which being split here at the end of the "road," assumes the stature of a tall tree. This is my story, of course, but I find that the balance and the colors of the piece stimulate me beyond its superficial satisfaction. "My artwork is self-contained. It refers to nothing outside of itself," is the maker's statement, non-binding on the viewer, and so a gift to her or him.


To say that one's work is self-contained; to turn to it unbidden, without angst, every day of one's life; to be able to keep the artifacts without reliance on their materiality for knowledge of their value: These things, more than the pomp of his resume, make Paul Zelanski an artist worth knowing. People who work day in and day out get a lot done. People who get a lot done learn their art and their craft at a profound level; their minds expand in concentric circles around the apparent task. What they discover during those meditations is brought back into the work—those thoughts are also "found materials."

On the website that his daughters have made for him to spare him the bother, to save his time for his work, there is mention of how to purchase Zelanski's collages; he would be glad to sell you one. He still shows—a show having just closed on November 8 at the Mystic Arts Center in Mystic, Connecticut. But the commerce and display seem to result from his faithfully doing his job of making art daily. His job uses and expands his high creativity, and leads him deeper into his mind and his materials.

"If they/ we/ I only had the discipline…" "Without discipline, they'll get nowhere." The idea that discipline—of shaping the will to a desired course by means of consistent actions —makes the difference between fame and failure, success and defeat, achievement and wash-out is a commonplace with Americans. It nearly always carries the image of grim willfulness, or steely determination. Discipline is something applied by a harsher (and better) self, if not by an outside force completely.

Paul Zelanski's art goes far beyond the visual as a result of his discipline. Returning to his space and surrendering himself to creating and reconciling problems of space and color are what constitute his discipline, imposed from within, by love of being human and able to create.

Because he is always working, Zelanski continually moves forward without creating its own impediments of ambition or comparison. Daily investigation keeps the mind fresh, so it cannot but invent and discover. It can't do other than evolve and be aware of doing so. The past is "in the barn," but its vitality is in the person as part of the exploratory urge.

Zelanski sets himself an agenda of what pleases him. He does what he can with what is available. Art is not heroism but real life for him. Art is in his mind and eye and in the minute components of any materials—the water drop stain on a colored paper, the luster of a ribbon, the decayed perforation of a leaf. Art doesn't take much in the way of materials, but it requires much of the person. Paul Zelanski personifies art. His vision is the product of instinct, deep visual experience, and creative discipline nurtured by an active heart and warm mind.
Posted by STARR REVIEW, New Edition at 12:29 PM