Norman Rockwell, In the Picture and Out

The Dayton Art Institute is showing American Chronicle: The Art of Norman Rockwell through February 5. It's a great big show with 42 original works and all 323 covers Rockwell created over 47 years for The Saturday Evening Post. I've always thought Rockwell a low-brow artist of treacly subjects, though a witty storyteller with a great aptitude for visual characterization. A man of ideas whose work transforms me? No.
Still, I'm the first person to advocate for contemporary artists whose work friends dismiss because they "just don't get it." "You've got to ask some questions," I'll say. "Try to figure out what why she's made the decisions she has to create this image." At the threshold of this definitive show in Dayton, it was clearly time to do what I say. American Chronicle puts Rockwell in a context that the single reproductions through which most of us know him cannot. I left the Institute knowing that I've completely misconstrued what he was trying to do. I've ascribed the images of the enormous Thanksgiving turkey presented to the reverent wartime family and the mythic summertime frolics of youth to the boring technician, Norman Rockwell. After having seen this large show in Dayton, I begin to doubt, though, that Norman Rockwell was more than a label for a subtle and elusive artist whose ideas may not at all be revealed in the obvious ways I—like many others—have assumed.
Rockwell is the artist who defined America's contented normality. His images of happy, middle-class, multi-generational families; of Boy Scouts, and the exercise of Christian-based, simple moral values have played a material role in defining an idea of national unity heartening to many. The same aspects of his work are repellant to many others troubled by the racial and economic injustice overlooked in most of his oeuvre of contentment.
A gallery note at the show, supported by a short video, demonstrates that the American family Rockwell portrayed on magazine covers formed the basis of early television's sitcom families. Leave it to Beaver, Father Knows Best, and The Adventures of Ozzie and Harriet simply continued in sound and action the families solidly established by years of Rockwell's still, two-dimensional stories. But Rockwell's self-generated white neighborhood integrated once he left The Saturday Evening Post in the 1960's and moved to Look magazine. It seems that the white families for which he's so famous arose in part from editorial policy. The Post would not have Blacks represented on its cover except in the roles of servants. The Problem We All Live With was published in Look. 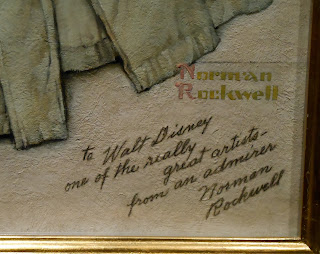 "I'm not a fine art man," Rockwell said of himself. Here he inscribes a painting to Walt Disney, "one of the really great artists." The genre of dedication invites fulsome language, but Disney might well have been an idol for Rockwell. After all, Rockwell was a professional illustrator with an enviable, lucrative gig at a leading magazine. Like Disney, he was in the business of providing delight for profit.
This charming early cover for The Saturday Evening Post, where he began at age 22, provides an amusing view of an "artist at work"—so we suppose, accustomed as we are to understanding easel and brushes as icons of the fine artist. This is no artist in a romantic sense, for the picture is dominated by the icons of the illustrator. Conspicuous are the watch and reminder of his deadline: He's not waiting for the skies to part and offer Inspiration, though he wouldn't mind it: Note the horseshoe. In functional aid of inspiration, his bookshelf holds a volume called "Dog Clips" and another called, "Models—Old Men/Boys/Pretty Girls." There's one more stout book on the shelf: "Bills." This artist is a working man, on the clock, with bills to pay. He's sitting closer to the advertising department than the art museum.
Commercial artists work on assignments under the guidance of editors, and are governed by their rules ("No Blacks"). The job for a cover-designer is to catch and hold the consumer's eye, to make a particular population want the magazine, ultimately so it can attract advertisers. Rockwell did his job by using his vast art skills and considerable wits to tell stories visually. He explicitly considered himself a storyteller rather than the "fine art man."
Considering Rockwell's works as well-considered responses to his assignments, they are brilliant. Would I ever give that man a raise! He engages the viewer with instantly appealing stories that speak to a middle-class magazine-purchasing public. His stories are so much richer than they have to be. He is a storyteller on a level with Robert Louis Stevenson or O. Henry. His command of detail and structure, the way he develops tension and internal relationships are magnificent. And even those who dismiss his work as artistically insubstantial have to be very impressed by his narrative ability and by the flawless realistic technique that supports it, technique ideal for articulating the stories and lending them the air of truth. He made no claim to be addressing the taste of fine art consoisseurs. It's not what The Post  was paying him to do.

Rockwell carefully chose his approach to illustration. In this tour de force cover, Lubalin Redesigning the Post, 1961, he puts his colleague in the chair to work on his assignment of updating the magazine's look. Clipped to Lubalin's drawing board are back issues, including many Rockwell covers that look decidedly old-fashioned. But old-fashioned was Rockwell's choice—it was his preferred narrative voice. To make the point, though, that he was a virtuoso who could do anything he pleased, he painted  this cover entirely in Lubalin's style. Not only are the content details—the furniture, the haircut, the coffee mug—all up-to-date, but even Rockwell's painting technique departs from his usual, heavily built-up application of paint. On this canvas, the paint is thinned; he uses just enough to cover, quite in keeping with the sleek, spare, contemporary message Lubalin works on. The perfect unity of message and medium extends to Rockwell's very signature, conscious of current trends in letter forms. 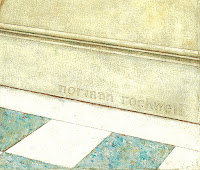 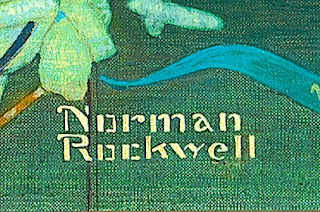 Posted by STARR REVIEW, New Edition at 10:35 AM