I Reconsider the Necessity of Criticism

The work entailed by running a young publishing company has been so all-consuming that I concluded a few months ago that I could no longer devote time to writing Starr Review: that I was overwhelmed and responsible to my authors were sufficient reasons to give it up. I didn’t mention my growing skepticism that it made much of a difference one way or the other whether I wrote or not. 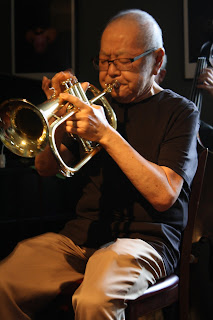 Silly me! I shall pick up my pixels once again on whatever irregular basis I can. My lapse from reviewing has allowed me to conclude that readers or none, I feel compelled to write criticism to reflect and expand the impact of artists I'm moved by—what they think and make. Who can grow without discussion? How can I enjoy art without the time that writing makes me take to consider it deeply, in proportion to the generosity and magnitude of labor that brings art to us?

This weekend past I heard and talked with the brilliant musician and musical thinker, Ray Sasaki who is, among many other things, trumpeter with the Tone Road Ramblers. Ray spoke about the fact that he’s been playing his instrument since he was eight years old. How simply he told his audience that to play his horn is to speak. In essence, he is bilingual and it’s not clear that English is the more fluent language.

This stopped me in my tracks for being so simple, primary, and universally applicable. We often want to be relieved of the work of accepting gifts of art that we have to assemble with toolboxes limited to verbal language. “Artist: Just tell me what you mean! Be your own museum label!”

When Sasaki speaks music, does it matter if I make sense of it with words? Of course it does: that’s what most of us know. Art in all forms is sent out into a verbal world. It’s in the space between musical or visual or spatial language (literary language too!) and our attempts to understand it that meaning, discovery, and love happen. That's the space where criticism helps us appreciate, question, and discuss Sasaki’s sounds, where we can thank him directly or indirectly. In writing, I can lead others to his music and the world of ideas into which he invites us. These are the reasons to write—and to read—criticism. Or “reviews” as single-subject critical pieces are called. (see The Tone Road Ramblers: Always Some Surprises)

Being a publisher now has made me all the more poignantly aware of the dilution of reviewing. In visual art, one has long seen the decline of art reviews in local papers and the brevity of those that appear. Book reviewing, on the other hand, would seem to be undergoing a renaissance, thanks to customer reviews on Amazon’s commercial site and especially reader reviews on Goodreads’ social media network.

Book reviews are central to the literary world. They inform us about meritorious titles, and give us a chance to discuss them in our minds with informed interlocutors. It’s been sad to see book reviews fall away from the weekend sections of city newspapers, or to shrink under niggardly word limits where they do survive. There are fewer than there used to be. So I thought until these days of on-line, popular reviewing.

A book review is a signed essay that describes the work, raises and expatiates upon its themes and connects the work and writer to the wider world. The genre of review flourishing on websites simply summarizes the plot or argument of a work and rates it according to the reader’s feeling of like dislike—five stars or one, thumbs up or down. This isn’t a book review. It’s a book report or, if sufficiently succinct, advertising copy.

Goodreads serves the active and enthusiastic reader as wide-ranging, democratic book club. Readers have the satisfaction of keeping booklists that serve as reading diaries. They are motivated to read more by being in the virtual midst of readers who are always “talking” about books and comparing notes. Readers enjoy the companionship of overlapping communities with similar tastes and enthusiasms, which, in turn may nudge them into broadening their tastes in authors and genres. I think Goodreads has to be a plus for adult reading generally, a club with meetings on any schedule needed and no irresistible fattening noshes.

It’s unfortunate that the posts on Goodreads get called “reviews” since they almost never rise beyond plot summary and a rating based on a personal, eccentric factor. A book receives a “1” because the reader doesn’t like books with lots of characters. Another receives a “5” because the reviewer finds beautiful (for no illustrated reason) the writing that most book critics would deplore as ponderous. In short, analysis, specificity, comparison are hard to find in this world. Authority based on other than taste is rarely present.

Goodreads reviews do reflect the world of “legit” book reviewing in one discouraging way, that being that a few “hot” books are reviewed hundreds of times while books that are less publicized (and continue that way for all the attention lavished on the best-sellers) go relatively unnoticed. The connection between criticism and marketing is as embarrassing as the emperor’s new clothes. While the publishing world is replete with titles, the marketing budget or previous sales of an author’s books are what draw reviewers both popular and professional. No one wants to be seen making a call on an “unimportant” title: Most reviewers are very conservative, and are unlikely to introduce a new title by themselves. It's also hard to turn down a free book received through a well-oiled network.

I asked a NPR host who once spoke in Columbus why all of the many shows on the network reviewed the same one or two books at a time, when there are always so many to choose from. He dodged the question with a laugh.

Is criticism about passing judgment? Rating? Thumbs up or down? Take my word for it? You’ll love it?

Hooray for readers! Hooray for sharing opinions, for reading together, for swapping books, for keeping au courant. But let’s not mistake Goodreads and Amazon book reports and opinion-posting for criticism—that deeper, time-expanding conversation that takes us farther inside a book and into the widening spirals of space, time, and idea around it.

Posted by STARR REVIEW, New Edition at 10:33 AM 4 comments