Jim Dine at the Cincinnati Art Museum: The Story of Pinocchio and Geppetto

Unveiled earlier in April, Jim Dine's twelve-foot high bronze sculpture, Pinocchio (Emotional) greets visitors to the Cincinnati Museum of Art with uplifted arms. For his hometown, Dine custom-crafted this one out of an edition of three; he traveled to Cincinnati to oversee its installation.
Dine has been working with the story and character of Pinocchio since the late 1990s. A Disney executive asked him for a work with the puppet as subject, but then declined Dine's painting for being too dark and disturbing. Dine's Pinocchio isn't the Disney character, but the one found in Italian Carlo Collodi's 1883 story. It's a troubling tale in which the blockhead who aspires to personhood constantly faces nigh-fatal consequences of his impetuosity, naivety, folly and venality.


Somehow, I wasn't too surprised to learn this. As a child I found even the Disney version hard to face. Pinocchio struck me as a good-hearted kid whose innocent investigations and unselfconscious curiosity kept getting him into situations with dire, unforeseeable moral repercussions. I found the whole Pinocchio business too discouraging for my young ethical understanding.  Maybe he should have stayed home, I timidly thought, and let it drop.


Dine, however, has always understood the reality of curiosity, desire, and the insistent, demanding ego. Even before one skims the surface of this Pinocchio work, his statement seems particularly deeply felt. Here's what he says:


"Thanks to Carlo Collodi, the real creator of Pinocchio, I have for many years been able to live thru the wooden boy. His ability to hold the metaphor in limitless ways has made my drawings, painting, and sculpture of him richer by far. His poor burned feet, his misguided judgment, his vanity about his large nose, his temporary donkey ears, all add up to the real sum of his parts. In the end it is his great heart that holds me. I have carried him on my back like landscape since I was six years old. Sixty-four years is a long time to get to know someone, yet his depth and secrets are endless." 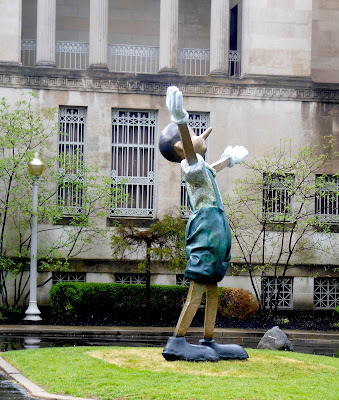 The Cincinnati Museum has much more than Pinocchio (Emotional). Dine has explored Pinocchio in a suite of lithographs based on the thirty-six chapters of Collodi's The Adventures of Pinocchio. The Museum has installed these on a wall in the Manuel D. and Rhoda Mayerson Gallery. These prints were published in slightly different forms as a graphic portfolio by German publisher Steidl. The images in that 2006 published portfolio also serve as illustrations to the Collodi text, translated by M. A. Murray, in a handsome, affordable book, also by Steidl.


The sculpture itself, though, is packed with meanings and emotions that arise and disappear depending, first, on where you stand. This has to do with what your size and stature may be. A twelve-foot statue is much bigger to a child than to a full-grown adult. Anyone who approaches it will be looking up, though. The impact of the lifted arms and the head, tilted back so that the face is lifted heavenwards, is exaggerated from below. The length of Pinocchio's sharp nose makes it a dramatic spear-head, a pointer leading victoriously upward and onward. The vantage point—the face seen from below, is a point of view of awe or reverence; it's how we see heroes and figures of inspiration portrayed—above us, inspiring or majestic.


Raised arms can signal victory and completion, as the performer of a magic trick raises applause and reveals his empty hands after the execution of an amazing illusion. Raised arms also indicate joy: We see Pinocchio here perhaps not as a performer who has made escape after escape from robber foxes, monstrous serpents, and those who would fry him as a fish; but we see him as one who rejoices to be alive among the flowering trees of April, in Eden Park! Pinocchio greets us joyously, as a survivor, happy to be alive.


Pinocchio's journey (the story is both a picaresque and a Bildungsroman—a story of maturation) begins with a block of wood that shows signs of life (it speaks, mysteriously) and ends with its transformation into a real boy. In Pinocchio (Emotional), Pinocchio seems to be in intermediate form. His arms and legs are sticks and his head is modeled like a cartoon's or puppet's, with exaggerated, abstract shapes, barely any mouth, and no eyes at all.


By contrast, the color lithograph to the right (scanned from a Museum hand-out) shows the first images of Pinocchio in Dine's suite of broadside lithographs. It is in roughly this guise that the puppet goes through the story told by the prints, and again in the similar images that accompany Collodi's text as illustrations. This is a more free-wheeling, cartoonish and adolescent character than the one shaped in the sculpture. The Pinocchio of the drawings is very animated in the simple sense that he is kinetic, always moving or reacting (below). The sculpted character is planted declaratively on his big feet. There's no suggestion that he desires to abandon his pose or give any ground. His character is unlike that of the eager puppet-boy in Dine's drawings.


For being so firmly planted and so four-square in its pose, Pinocchio nevertheless delivers a few quiet surprises.


Its  carefully wrought surface certainly invites the hand. Where it effectively depicts a stick figure in lederhosen with cartoonish extremities,
the hand enjoys the rough grain of the wood, the nubbly fabric of the wooly shirt, the suede of the shorts. We notice, too, the darkening of the wooden legs just above the shoes--a reminder of the early episode in the story when Pinocchio carelessly falls asleep with his feet on a brazier and burns them off, requiring his doting Geppetto to fashion new ones the next day. 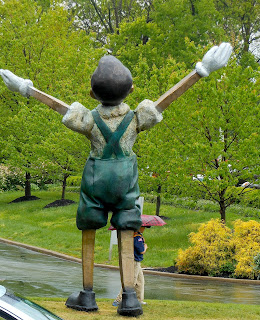 Circling Pinocchio from any distance in fact provides views that deepen interpretation of Dine's relationship to this subject. Take the extended arms, for example. Above, I suggested that it's the pose of the successful showman (Ta-da!) or of one rejoicing. Yet when I saw him from behind, one foot back and heel raised, head thrown back and facing down the driveway by which cars approach the Museum, the pose read, "Over here!"—like an attempt to flag down whomever would pass by. No longer victorious, there's a hint of angst and neediness.


In another view that emphasizes the upturned head and nose between the raised arms, there is a vivid sense of Christ on a cross that is no less real for being invisible. The arch of Pinocchio's back and the slight bend of the knee reinforce the pose, though the appeal of the upturned face is usually prevented by the mast of the real cross.


Pinocchio has parallels with stories like Candide and The Pilgrim's Progress, humanistic and Christian, similar in being works of misguided or despairing quest. Dine is clearly moved by the deep humanity of the character, whose follies and blindness not only impede his maturation but call its possibility into question. This view of the statue, which brings crucifixion to mind, does not inappropriately compare the silly to the profound. Philosophy, art, and grace begin with tiny voices in the hardest of material, I believe Dine would have us think. 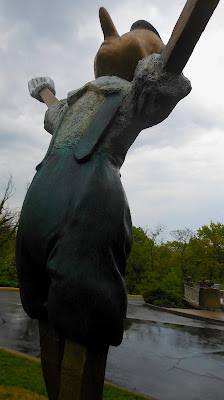 The story of Pinocchio is at the same time the story of Geppetto, the complicated character who fashions the puppet from an impertinent piece of wood. Geppetto's dwelling is both poor and surreal, being supplied with, "a bad chair, a poor bed, and a broken-down table. At the end of the room there was fireplace with a lighted fire; but the fire was painted, and by the fire was a painted saucepan that was boiling cheerfully, and sending out a cloud of smoke that looked exactly like real smoke." (Murray translation, p.19.) The block of wood has ended up in good hands, with a maker in whose mind reality and imagination are fused to meet his needs and ends.

Geppetto is depicted in the book (and in a different state in the print suite) by Dine's self-portrait,  clinching the idea that he cannot be the artist of Pinocchio without identifying equally with Geppetto. Geppetto's wish is to create a nice, normal son who will behave himself and go to school. He sells the coat he can ill afford to part with to raise the money for Pinocchio's spelling book, which the blockhead sells at the first temptation on the way to school. Is Geppetto the sacrificing martyr? Or an old fool for thinking that his child will not be wayward and have his own experience of risk and error in life?


The figure of Pinocchio is familiar to us because of his long nose (that grows longer with lies) and the donkey ears he sprouts in the Land of Boobies. But Geppetto, "first made his hair, then his forehead, and then his eyes.


"The eyes being finished, imagine his astonishment when he perceived that they moved and looked fixedly at him.


"Geppetto, seeing himself stared at by those two wooden eyes, took it almost in bad part...'Wicked wooden eyes, why do you look at me?'" (Murray translation, p.19.) 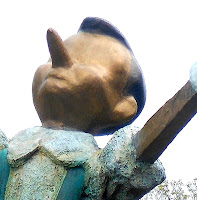 Pinocchio (Emotional) lacks eyes, one of the first features that Geppetto bestowed on his puppet son. It's disconcerting to have a visual artist leave the eyes out. Does he fear what might be reflected in the gaze of his work? Isn't there a level at which artists worry about what their productions "tell" about them? How closely do others—let alone the creators themselves—identify with completed works? How long do the ties linger?


Dine may see in Pinocchio—as anyone may—a character with whom one can associate one's lifetime of risks, mistakes, and indulgences, of juvenile and adolescent decisions made in spite of good intentions, of the awkward process of building mental and moral muscle. Hooray! Good work! We've succeeded...at what? For how long? Perhaps we're always blind to the much more we will never see coming.


But it's Pinocchio's relationship with Geppetto—Pinocchio, the wayward, inspired creation of Geppetto; and Geppetto, the flawed and inspired creator—that Dine has perhaps truly embodied in this excellent sculpture. His self-consciousness as an artist; his gift and curse of both planning, executing, and revising the work; being the father and son, the material and the soul; comprehending the story's beginning and (temporary) end—Dine's complex roles make it impossible, I think, for this single work  to embody a single character any more than A Man can be presented only as Dine, Artist, Fool, or Son.


A career in art, the relationships between artist and art, or between lover and life, lover and art, or lover and one's own output: Those could be in there, waving their arms above us with the unnamed, many emotions of miserable, absurd, soul-sapping, bedazzling life. Read the story of Pinocchio and Geppetto: It's all there. In Dine's version, there's even more.