Elijah Pierce, Sanctuary in the 1960s

Columbus, Ohio lays claim to its share of famous artists: George Bellows was born and raised here, as was James Thurber. Roy Lichtenstein studied and taught at Ohio State during the '40s. Currently living and working among us are the pioneer of computer art, Charles Csuri; photographer Tony Mendoza; Ann Hamilton, and Aminah Robinson.

Robinson is a direct heir—personal and artistic—of the artist I believe closest to our city's civic identity, woodcarver Elijah Pierce. Pierce, a barber by trade, came to Columbus in 1916 when he was 24. He died here in 1984, at age 92. The son of a former slave, he grew up in rural Mississippi where he studied through the eighth grade and learned to carve with a pocketknife.
In Columbus, Pierce was famous not only as a carver, but also as the spiritual center of a community. He was the man without whom a large and prolific generation of the city's Black artists might have missed their calling. Art, religious devotion, and rock-solid principles for righteous living were strongly allied in him, as both his oeuvre and the living memory of him attest.
During his lifetime, Pierce became famous beyond Columbus. In 1973, he won first prize in the  International Exhibition of Primitive Art in Yugoslavia. In 1975, he was awarded a National Heritage Fellowship by the National Endowment for the Arts, as a master traditional artist.
Among the many to whom Pierce was a mentor and inspiration is Kojo Kamau, Columbus's eminent photographer. Some of Kamau's photos of Pierce and his shop can be found online here. Although the photos show what we know to be an urban workshop in the late 20th century, Pierce himself looks like a man from an earlier place and era. His famously stick-like figure—his expression adding to the sense of a cigar-store Indian in the view of him at his table, formally dressed in his unimproved setting—certainly reinforces the stories about the man himself: unpretentious, plain, a believer with his eyes on the right course. Nothing about him suggests that he felt any need to appear sophisticated or urbane. 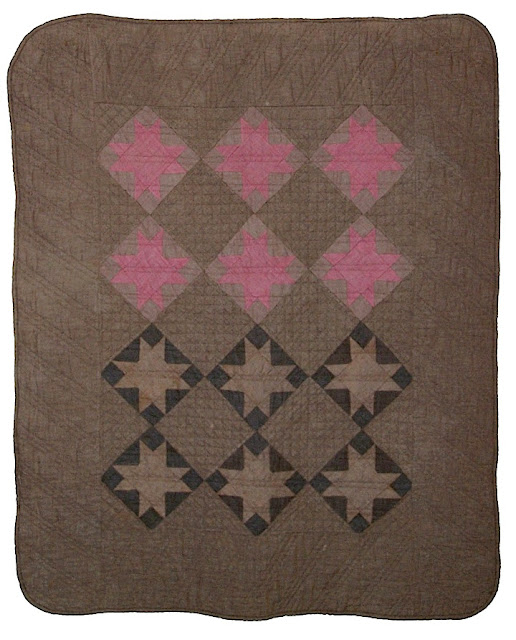 The Keny Galleries in Columbus are currently showing Two Visions of Spirituality: Elijah Pierce's Woodcarvings and Historical Amish Quilts, a beautiful show. Pierce's carvings make a natural visual pairing with the quilts. Together they evoke the warmth of personal, direct expression from a rural past. Ohio is home to substantial and still growing Amish communities that preserve traditional ways, down to continuing use of horse and buggy transportation and eschewal of electrification. Even though the patterns and sewing methods of the quilts displayed can be found today, the antique quilts in this show  (ranging from the 1890s through 1937) do indeed have the softness that age imparts textiles. Time has enriched their inherent beauty.
It finally struck me, though, as I surveyed Pierce's boldly colored, folkloric carvings of Jesus, angels, and biblical stories, that most of his work in this show—hanging so comfortably among the antique quilts—actually dates from the 1960s and '70s. His carvings, so simple in appearance and convinced in moral vision, are the work of an urban Black man—one who remained a starched community elder, sitting downtown in his rocker, plying folk art during the civil rights era of fiery social and racial unrest. 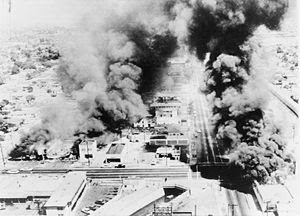 In 1965, when many of the pieces at Keny are dated, I was a high school student in small-town Ohio, unable to escape the network news my parents watched every evening. In memory, it's all scenes of shattered windows and fires at night in cities wracked by race riots. The people of my homogenous town had strongly worded and freely expressed opinions about Negroes in general. My skin was always crawling with generalized foreboding. Heroes and hopes were assassinated as if we were supposed to get used to it. The world felt to me wholly public and political, a world of causes, not individuals. For an introspective, cloistered girl it was an appalling time. While I was engaged by the cause of civil rights, I was overpowered by the intensity of the public world. I lacked knowing that it could be legitimate to insist on growing up as a clear-headed individual with some solid ideas about her place in the world.

My memories of the intense anxiety of the '60s make the Keny selection of Pierce's work feel almost shockingly immediate and new. These carvings, so focused on the spiritual life, picture havens of the personal in a world that we know was overtaken by virtual public warfare and urgent social movements. Art has to come from a strong, concentrated self—even art that responds directly to the affairs of the world or proposes changes in them. 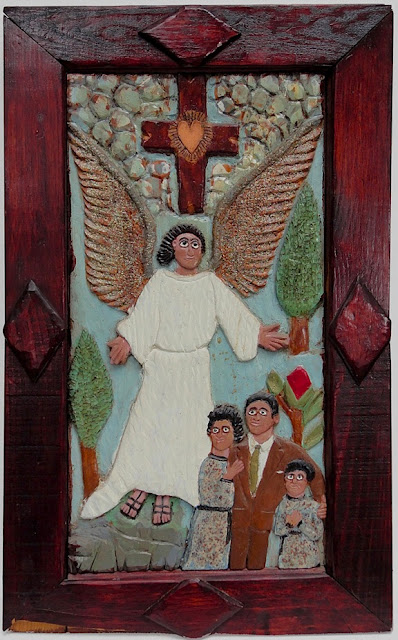 Pierce was hardly oblivious to society: His work covered civil rights themes and heroes. The work in the Keny show is only a tiny selection of his spiritual oeuvre. But even here we see in one of his many portrayals of angels, an Angel (with Ruby Brown's Family) from 1966, his concern with issues of race. Ruby Brown is the title subject of a poem by Langston Hughes:
She was young and beautiful
And golden like the sunshine
That warmed her body.
And because she was colored
Mayville had no place to offer her,
Nor fuel for the clean flame of joy
That tried to burn within her soul.
In Hughes' poem, Ruby, the scullery maid, is corrupted into prostitution by men who take advantage of her entirely normal wishes for a life with a little money and incident. "The good church folk do not mention/ Her name any more." But Pierce depicts an angel before a cross with the sacred heart, and a rose of Sharon, protecting Ruby's family from any taunts by churchgoing neighbors. Not only are they protected, they are totally removed from others.
In Angel with Mother and Child, too, a mother and her son appear to stand in a garden with an angel watching over them. Part of their blessed status seems to be their self-contained separation from anyone else.
Even in The Good Samaritan, the most complex and detailed composition here, the special, protective relationship is celebrated. The priest and the Levite—dominant in their size, posture, and colors—pass the robbers' victim, but the Samaritan—small and brown—bows over to assist him. Their relationship appears, like the angelic ones we've seen, to be placed in a garden, away from the open space the others traverse.
The most interesting removal of all, I think, is the portrayal of Jesus in Sermon on the Mount. He sits with his hands folded on his knees, alone on a hill under a sky with three-dimensional clouds. The yellow orb has beams that signify sun, although the darkness of the upper sky gives the feeling of night rolling in, with either the sun setting or the moon rising.
For a depiction of the Sermon on the Mount this is unusual, for there is no congregation even suggested, only Jesus with his upward-looking, far-away gaze. He's not preaching: He's thinking, or introspecting. Under a dramatic sky, with flowers growing at his feet, Jesus looks so contented! This is a moment of quiet happiness that the human writing this entirely relates to. It's a contentment that seems achievable, even without a halo.
While my observations about the carvings in Keny's beautiful show may add nothing to the knowledge of Pierce's work, my point in writing is about my own satisfaction to discover in this folk artist a fellow traveler through an era so disconcerting and painful to me, one in which I felt so keen a need for a quiet shelter. I wish I had discovered him then.
I've never had religious convictions; Jesus is a metaphor for me. But the habit of cultivating strength from the inside out, through wise solitude, is one I've learned to value highly. It's a form of spirituality characteristic not only of religion, but of artistic visions as well. While the 1960s flamed, Pierce maintained his religious faith and expressed it through art-making too. Whatever his legacy in the church, his legacy among practicing artists is deep. To inspire seekers of freedom for the inner life amidst a clamorous world of mass concerns strikes me as a great legacy.
Posted by STARR REVIEW, New Edition at 9:01 AM