"Four (Outstanding) Ways of Looking" at the Lindsay Gallery

Linda Gall curated the beautiful painting show, Four Ways of Looking, installed at the Lindsay Gallery in Columbus until the end of March. I've read elsewhere the suggestion that there is an environmental topic that organizes the show. It's a stretch to see that, and why try? The show is so well organized aesthetically that Gall's talents shine through as much on the curatorial level as through her witty painting.

Gall has chosen only two works by each of the artists—Laura Bidwa, Sarah Fairchild, Laura Sanders, and herself. She's placed one large painting by each artist in the airy front room, and a small one in the busy back room, where work by some regular gallery artists also hangs.

In the main room, each of the four paintings is more than strong enough to bear the exposure it gets; and all are unquestionably peers. Fairchild and Sanders create obvious drama in their work; Bidwa and Gall present with restraint. The paintings are hung for excellent visual balance and they provide an engaging variety of experiences for the viewer's imagination. Each painting stands out for its unique expression, and each is enhanced by contrast with those around it. Yet there is no sense of competition for notice; the balance is perfect. This is truly artful curating, to generate the sense that each work might lose a little once it's removed from its neighborly relationships when the show closes.

Laura Bidwa's Tromage fascinates me with its many floating levels, all as thin as transparencies laid atop one another on a panel of seeming worn, black linen. I found myself holding my breath in the face of the mysterious calmness, which seemed to mask something explosive. The detail above gives a better indication of how colorful is the central figure, sitting like a Buddha on the floor. But, as the detail shows, it is not really a mass, but a series of ambient layers, atop which the red line moves like a descant. The bee's flight over a flower? The blood vessels bringing life to the brain? Separation and unity, life and indifference—I could contemplate this painting and its spectrum of thought for a long, long time.


Bidwa's smaller offering, Wanted To, offers a similar pleasure, but it is even more minimal and diaphanous. Here, the single event on the streaked plane of black over white gives the impression that it is crawling or slithering into the picture plane. To me it looks like nothing sensate lest it be a body part, an organ—or even a thought—given a life of its own. Sweetbreads, a gland, for it has the fragile transparency of the fluid organic? As I do with Tromage, I react in complicated ways to this painting's beauty and to its mixed sensory signals. The horizontal brushstrokes of the background suggest speed; the lumpish form suggests the opposite and seems particularly determined, therefore, especially in its position on the "floor." I feel like the painter has put me on the fence between the wonderful and the sinister. Part of me "wants to" immerse myself in this, and part doesn't dare.

Sarah Fairchild's paintings could not be more different in look—they are as decadent as Bidwa's are spare—yet they, too, walk the line between surreal beauty and something more. They are like the vegetal versions of full frontal nudity. Her nominal subject "the beauty of local food – farm to table – [that] raises awareness of what we eat" isn't to my eye at all what is delivered here, though it may be the point of departure into her world of sensual magic. I'm not lingering in these to eat my peas. The beauty of her work is the way she runs natural forms through the fiery furnace of her vision—her way of seeing, which is in iridescence, flocking, and colors nature rarely shows us. Her work brings intense aestheticism into a crashing encounter with flowery sensuality in something unique and wonderful—boudoir meets psychedelic opera.
I was amused by Fairchild's mixed-media Silks, which I at first considered to be named for the fabrics flowing from the torsos of dancers. Of course, its for the silk atop the ears of corn on the stalks represented here. I like the way that the image can so easily be taken either way—or no way at all, appreciated for its rhythm and light symmetry, its formal whimsy.


Lush painting takes a different direction in the hands of Laura Sanders. Her humble subject matter gets realistic treatment, but her lavish handling of oil paint creates a magic different from but no less enthralling than Fairchild's. Of the painters represented here, photographs do least justice to Sanders's work because her "live" surfaces give the impression that she has delivered paintings straight from the easel to the gallery wall, they are so wet and fresh. While her work conveys the sense of literal, eye-witness detail, she paints with broad brushes, in thick slabs. While the keenness of observation is arresting, the presence of artifice is very evidently what takes you there.

Sanders's paintings create high drama from an everyday, backyard scene. In this, they are consonant with the other work in the show. All of these artists seemingly take nothing in particular as their focal points and make emotional mountains thereof. Everybody's doing it these days? I think that's largely true, but I like the way these four embrace the stage so unabashedly.
Linda Gall's paintings, while spare indeed, and dry as the wood panel they are painted on, are the most theatrical of all. Her protagonists are not mysterious forms or figures in dramatic lighting, but china figurines whose expressions and poses are given. They come ready-made, and their virtue is in the ease with which they can be interpreted. Gall takes advantage of stock characters by putting them on stages not decorated for their dramas. She poses them in ironical situations or in settings they were not cast for.

Gall has painted on panel that she's left unfinished where it was unnecessary to represent something positive. In It's Just Lust, white, unshaded patterns of paint represent water that froths and splashes around the figures, who are painted in great detail—as their originals would have been in the china factories. The piles supporting an unseen pier get naturalistic treatment that contrasts in yet another way with the artificiality of the "water" and the idealized realism of the figurines. We are not simply asked to suspend our disbelief in this theater, but to wonder how to construct reality in the first place. Or, we can accept that this is life: Everyday we go about the world claiming coherence for what we make of inevitably patchwork perception. At any moment we see life simultaneously as flatly abstract, idealized, and defined by accepted scientific theory. 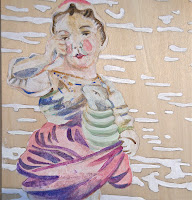 Gall's work is, to my mind, very funny. It's Just Lust could be subtitled, Under the Boardwalk. Three other figures have their backs turned to the passionate couple, surely imagined as a swain and milkmaid from an inland, cottage scene. The shepherdess with her lamb raises one hand to a tearful eye: Has Bo-Peep lost her sheep? Or is she shocked by the scene? Or by the invitation implied in that luscious, red, wet slice of melon offered her? All this in the white surf, the sign of lust's consummation in films of more discreet times. I like the stories inherent on the stage Gall has so purposefully blocked.


Four Ways of Looking is, as I said at the top, a show of excellent painters whose works are enhanced by their interrelationships in this show. The only thing not to like, I thought at the outset, was the title. "Egads! What a dull title, lacking any predictive force," was my initial impression.

I can't say that I've come up with anything better, though. As the reader can see, here are four  distinct ways of looking, but four deeply related points of view. The eye says they are different, but a little study corrects the vision better than glasses ever can.
Posted by STARR REVIEW, New Edition at 10:24 AM