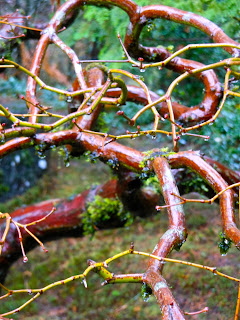 When it's forty-five degrees and raining outside, I'm sure to seek my pleasures indoors. Unless I'm in Portland, Oregon, that is. Recently visiting Portland in weather that would guarantee gloom elsewhere, I hardly wished to escape the rain and thereby miss the city's elfin palette of saturated greens; its blooming cyclamen and mysterious cypress trees spread over deep carpets of moss and lichens. My plans to visit the art museums went out the door with my umbrella and me. It may take me until spring to dry out in Columbus from the soakings I experienced in the Portland Japanese Garden and Lan Su Chinese Garden, but the memories are well worth any mortal mildew.

Portland is a polyglot city. Its relationships to China and Japan are everywhere felt and nowhere as fluently articulated as in the traditional gardens. Both are renowned as the most authentic of their kind outside of their countries. The Portland Japanese Garden occupies five and a half acres on a high, piney hillside inside the City's spectacularly situated Washington Park. Lan Su Chinese Garden fills only one city block. It is surrounded by the tall buildings, traffic, and construction of the city, providing within its vine-covered walls an other-wordly peacefulness.


The Japanese Garden is a collection of gardens in five different styles, each of which invites a distinct way of contemplating nature—and the soul. On these grounds, free-standing architecture or sculpture feels like part of the garden, rather than like excuses for landscaping. The Chinese gardens too are many, but each defined as a "vista," or point of view with a specific, named purpose. Each is precisely integrated architecturally and thematically into the pavilioned home of a Ming Dynasty scholar-aristocrat.

There was a special peace as there was a certain romance about my visit to the Japanese garden. It poured rain for every minute of the over-two hours that I spent there. This landscape not only needs water, but it dresses up in moisture too, the milky white atmosphere offsetting the broad spectrum of greens. I came across several groundskeepers in the course of my solitary wanderings. They were removing every dead leaf, stem, and blossom to heighten the piquant effect of the garden's abundant life.

The sense of occupying an enchanted zone was vivid for me: There appeared to be no fading, or decay; no loss or death there. The landscapes appeared both alive and permanent, conjuring serenity not only by the aesthetics of fine horticultural science and art, but also by the illusory banishment of temporality and of scale. In the view of the mounded bushes rising on the hillside across a pond, for instance, the blushes of color could suggest a scene from the spring in late December: While a plantsman would know the season precisely, it seems essentially unimportant for the enjoyment of the scene's beauty. And even more in person than in the photograph, one senses that the view could be of a far-away mountainside; of bonsai trees; or of the actual modest, human-scaled flora planted on a limited acreage. The mind can expand or contract to fill whatever space the scene suggests to the visitor.

Each of the Japanese gardens provides unique pleasure. Because the fecundity of the Pacific Northwest environment captivates me, I especially enjoyed the large Natural Garden, in which native plants are not shaped, but grow naturally along the paths, the stream, and around the waterfall. The infrastructure is carefully prepared and dead leaves removed so that there is no view of decay. An elegant pagoda-style lantern provides a focal point from at least two places and underscores one of the particular beauties of this garden, the underlying comparison between artifice and nature. For even though it is the Natural Garden—especially in relation to the more stylized and symbolic gardens around it—one only need look up into the foggy hillside of towering pines surrounding to consider two competing concepts of "natural." Any garden, however natural, is a work of artifice; a Japanese garden is artifice on an extraordinary level.

We are reminded that we are in a New World landscape at every stop, not only in the Natural Garden. Another highlight is the Sand and Stone or Dry Garden, often called a "Zen Garden" for the association of this style with Zen Buddhist monasteries. The only elements are sand and rocks; the design is symbolic of islands or continents in the ocean, or of the cosmos itself. The enjoyment is contemplative; benches are provided those better prepared to endure the wet and cold than I was at the moment. Each rock in the garden has been chosen with great care for its intrinsic character, and placed with skill and art—in this case, it's easy to see how they all tend toward the towering focal point, as if they move toward it, worshipfully, obediently, or gravitationally.

This is a place unrelieved by green, however, save by some bamboo and a few companion shrubs in the corners of the approach. Here the background of the native, wild, and untended landscape loom over what is surely one of gardening's most austere presentations. Despite the darkness of the day and the gray setting, I found myself still and focused on the great, upright rock. Its hunched, figurative form struck me as wise and strong. It exerted a force that made the smaller ones seem to respect and follow. Respect, fealty, and trust are awkward concepts for me, but in that setting they rested lightly, like the fog on the treetops.

The Flat Garden is the vast, serene ornament outside the central pavilion, what would have been the dwelling on the Gardens' model estate. Where the "sand" of the Sand and Stone Garden is in fact small stones, it is indeed a sea of raked white sand in the Flat Garden, in the midst of which two islands arise. I learned later that the shapes of the islands are significant, the small one representing a round sake cup, and the large, irregular one a gourd vessel from which the sake would be poured: In effect, they symbolize pleasure and hospitality.


The pavilion has a broad, covered porch extending from its paper sliding doors. On this one can stand or stroll to contemplate the beauties of the landscaped ocean. The far shores have many kinds of plants in many soothing groupings. Once more, the meticulously kept garden is surrounded by the flora of the Pacific Northwest's native terrain. One can also see in the distance several natural and man-made focal points situated among the peripheral plantings. 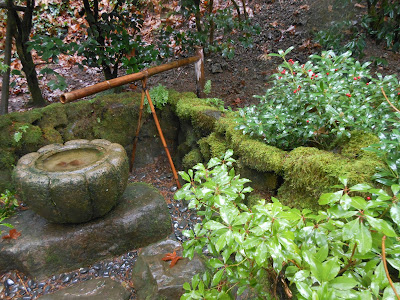 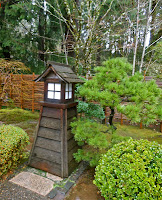 Throughout the Japanese gardens, nature is interrupted by small, man-made ornaments. Modest as these lanterns, bridges, gates, and basins are, the stone and wood materials and the unambiguous presence of the man-made turn each one into an event—another form of focal point or place to pause in admiration or reflection. Indeed, one passes through these gardens almost literally conscious of every step, for the sequence of views is unending, yet never so dense that one tires. A walk through the grounds, even in a downpour, is like riding a paper boat down a gentle rivulet of peace and alert uncaring.


The Lan Su Chinese Garden downtown Portland offers the rainy-day visitor many more opportunities to enjoy the landscape from under a pavilion roof. This is because the gardens are much more closely integrated into the architecture and living space of the wealthy family who would have owned the 16th century property. The ultimate goal here is to integrate every element within the walls not only visual harmony, but by symbol and significance as well.