At his recent opening at the Sherrie Gallerie in Columbus, I asked Davide Salvadore (through his congenial translator), if there is any room for chance in the process of creating his glass works, or if he has everything mapped out before he begins.


This master glass artist from Murano, the Venetian island that has been the center of glass works since the 13th century, has filled Sherrie Hawk's gallery with enchanting, glass "musical instruments." These have all been conceived from Salvadore's long-ago sight of an African woman carrying a jug on her head, dressed vivid fabrics. The sight fired in him a spontaneous love of Africa. Although he's never set foot on that continent, it has provided deep influence on the imagination that creates his mesmerizing work. 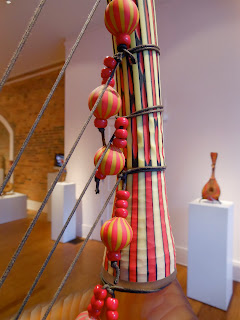 In answer to my question, Salvadore assured me that the work requires that everything be laid out carefully ahead of time. The multiple glass canes that will be fused, all the supplies must be in order for the master and his three assistants (two sons among them) to handle in timely sequence in a process that depends on timing and temperatures. Should anything fail to happen according to plan, he knows enough that he can repair some sorts of errors or amend them, but basically: No. If anything goes wrong, the procedure ends and the work is broken to pieces. The scraps might be used as decorative bits in something else, but there is no question of salvaging work that requires perfection.


I came to Salvadore's show lured by the beautiful card the gallery mailed, which made it quite clear that this was a glass show. Not only is the artist hailed as an "Italian maestro glass artist," but the image of the small, gem-like COCOE (2012, 21.5 x 13 x 7") could never be mistaken for any other medium. 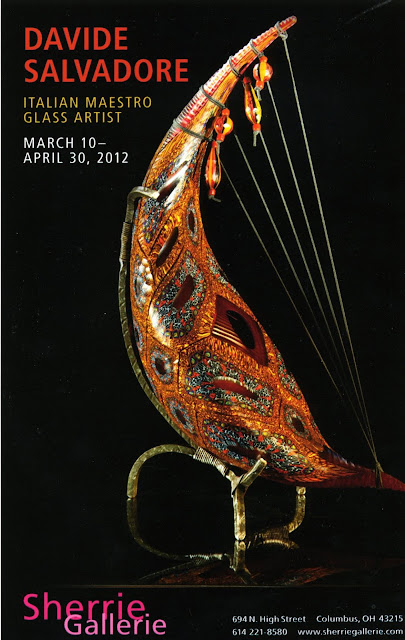 When I arrived for the opening and looked around, though, the room was dominated by much larger works than this, and I began to conclude that Salvadore worked in several media. The forms were clearly related, but the surfaces were quite different from one another. Kijana was evidently carved from wood, and Tipo was woven from durable grasses or handsome synthetic fiber with shell or wood inlay.

Of course, they are not. They are glass, and like everything in the show, they are made by a long and arduous process of blowing, joining components, surface finishing and carving. Within one body of work tightly defined by form and spirit, the variety of textures achieved is amazing.


Visitors to the Sherrie Gallery to see this work in person will be able to see Salvadore at work, aided by three assistants, in an excellent video produced by the Corning Glass Museum. Who isn't awed and amazed to watch glass artists at work? There is something deeply stirring about seeing form rescued time after time from molten batches, and precious objects emerging from flame. Artists who work with materials in constant fiery flux, who have to understand rolling, minute changes of state, are alchemists, turning sand almost literally into gold. 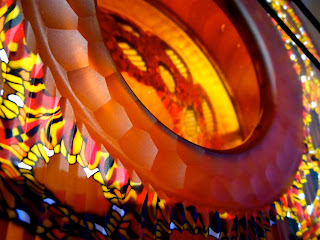 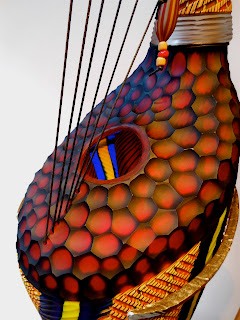 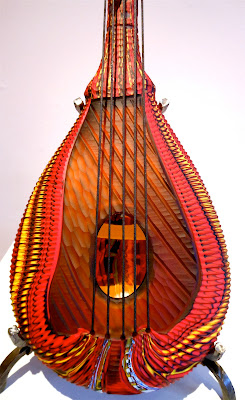 Salvadore's love of music inspired him to fashion this series of glass stringed instruments from his imagination. They serve one function of bowls or other open vessels, though, by displaying the artist's mastery over both the interior of the work and exterior of the work. In several cases this has the effect of making me wish I could experience the world in the richly saturated interior light. Once you glimpse the intensity at the core of the vessel, you understand that two works of art have been made simultaneously, one that reflects light back to us with its surface colors and textures, and the other, in the interior vault, that is illuminated by it.


Salvadore told me that he does little drawing to prepare for his work: Mostly, he works from his head. He knows what he wants to do, prepares and executes.


There are many artists working in many media who "take the plunge," and who set about their work with confidence in themselves and knowledge of their materials. Rarely, though, do artists anticipate a specific end when they work in this manner. The one comparison I can make to glass work at this level is musical composition (unaided by computers). In the composer's ear his materials are arrayed; a commission or a guiding conception helps the composer invent and arrange many complex elements. She thinks about color, texture, design, rhythm, dynamics, orchestration—elements with correspondences one finds in Salvadore's multi-layered work. What the glass-worker must do, though, that the composer rarely does, is work fast and hot, straight through, until the enormously complex design is complete and perfect. There will be no editing, play-back, or consultation. In this, the process is less like composition than like child-bearing—struggle and discipline, but blood and sweat too.

That the surfaces of the work be "alive and breathing" is paramount for Salvadore. In his statement, he says, " I encourage my audience to have a real encounter with each piece. I want them to touch it, caress it, and to understand the shapes and movements." Five-figure price-tags stand between this viewer and the deep desire to indulge the fingers. The surfaces of these sculptures are every bit as sensual and alluring as their colors and forms. Biubo, less ornately decorated than many of the others, gives us the opportunity simply to swim in the depth of its blue color and to trace the deeply cut rivulets in its surface. Unlike any of the other "African" work, this calls to my hand the way tan elegant woman's sweeping blue taffeta dress would, one decorated with corsages of spring flowers. 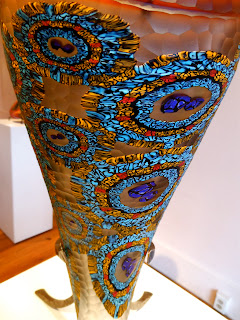 This, however, attracts a very different impulse of hand, the combination of hesitation and eagerness one would bring to treasure. I looked very closely at all the work; I am certain that there really is no gold used in any of it. But in this piece, Salvadore has managed to create a precious object from the vaults of Ozymandias. The surface, like many, is cut in a manner that makes it look like beaten metal surrounding the cane lozenges that sit flush with the rest of the glass. The translucent tip of the vessel appears to be a semi-precious stone or crystal. From glass, the artist has created an instrument we would dare to hold only with caressing fascination and awe, as if it had once been plucked by Orpheus. 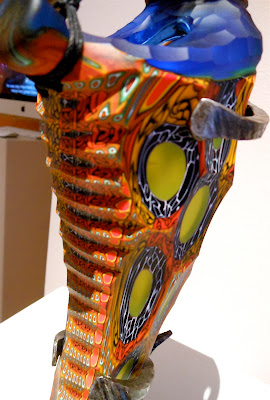 This Tiraboson is among the pieces where Salvadore's African fantasy is most strongly felt. The colors—just those colors of acid yellow-green, vivid red and orange in a lattice of black with a scarf of bright blue—are typical of West African wax cloth and its abstract, assertive patterns. The form though, is unique in this show of uniquely shaped work, for having the terraced, carved belly and neck. The slender proportions of this Tiraboson make me think of a fossil—a paleontologist's gaudy, imagined reconstruction of a seahorse from millennia before nature fell to the degrading uses of humans.


Columbus is a city that loves glass and enjoys its particular relationship with Dale Chihuly. The Franklin Park Conservatory, the city's admirable botanical garden, is punctuated with biomorphic Chihuly sculptures that are much beloved; the Columbus Museum of Art has shown Chihuly in popular shows and owns a spectacular hanging sculpture much like those at the Victoria and Albert in London, at the Corning Glass Museum, the Portland Museum of Art—and who knows how many others. They are crowd pleasers.


What Salvadore and Chihuly do are completely different things and to a degree it's pointless to compare them. In the video that accompanied Chihuly Illuminated that visited the Columbus Museum of Art in 2009, though, the shots of the workshop presented more of a factory in which assistants produce many multiples of the named, freely-formed shapes from which the artist selects to make sculptures or installations. The process is almost literally the opposite of Salvadore's, in which the wholly-invested artist is present at every step from conception through the final finishing. Chihuly's work is detached by comparison.


The literal weight of Salvadore's work I do not know, but it is substantial in the important sense. Even in photographs one can see that it is ardently formal. It is built up of layers encased in layers; it is so thick that at moments it seems to have felt the bite of a woodsman's axe. The presence of this work is phenomenal. Even the individual colors have mass.
I bring up a comparison with Chihuly here not because it makes much sense to compare their approaches to glass: They are trying to do different things.


But I compare them to emphasize the heat and investment of Salvadore's work. It is not literally true that you see the sheen of his sweat on every piece. It is not true that the gemlike colors are saturated with the artist's blood. And it's impossible that the ferocious time compression during Salvadore's labor causes the visual surface vibration in his work.


But every work explodes with life; and every detail is as intentional and as committed as a parent is to a newborn. To experience Salvadore's work is to experience the man who made them. That's to know his passion, integrity, will, and appetite. 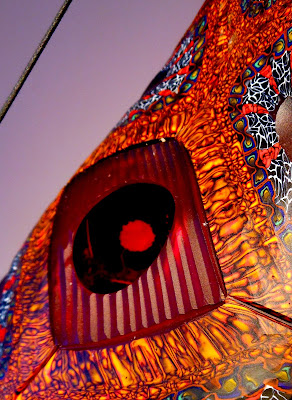 All photographs in this article were taken by the author.


Posted by STARR REVIEW, New Edition at 3:09 AM