The Values of Craft: Hand Made in Dakar

In the New York Times on December 2, 2011, Alice Pfeiffer writes about The Return of the Artisan to the Art World  . "Dedicated...university programs are contributing to the renewed recognition of these trades..while also providing young artists with marketable skills." A young English artist, chosen as an example, makes works that "comment on consumerism, using traditional techniques." She comments that people, used to factory production, now "long for a maker's mark on an object;" and she notes that highlighting craft expresses concerns over sustainability and local production, while being cheaper.
In short, this artist voices a Western notion about artisanship that is so taken for granted that it barely merits a second thought. Hand-made is de facto better than factory-made because it is filled with ethical values and a connection to the human spirit that elevates it into the world of art. A time-honored debate is waged among us about the status of crafts, whether they should be counted as "real art" or not. This is a question that can be raised only when it's a close call, with plenty of evidence on the pro side.

Preparing to travel for the second time to Dakar, Senegal in West Africa, the position of crafts in the hierarchy of arts is of poignant interest to me. Dakar is a city of people who make things. The fertility of imagination and the fecundity of hand there are almost unbelievable by American standards. Lacking manufacturing, and with an unemployment rate approaching 50%, people have to live. How else to get by in the city than by making and selling things?

In the contemporary Western world, craft is a matter of choice. It is a luxury. A weaver, a glassblower, or woodcarver understands that there are more efficient ways to get things done, yet chooses to practice the craft for the satisfactions of the materials, time, and creativity. Crafts are traditional: They are rarely necessary for keeping warm, having something to sit on, or glazing windows, but we honor our connections with the past through emulating them. Crafts are taught by skilled practitioners, in art schools or specialized courses. 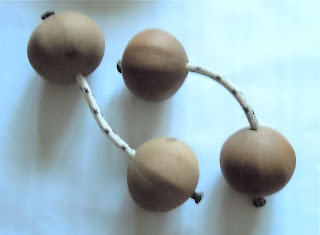 These rattles are among the hand-made items I brought back from my first trip to Senegal. Dakar is one of the world's music capitals, and though talking drums are for sale everywhere, these were unique in my experience of the city. They are made of large seed pods, attached by enough nylon cord that they rest between the thumb and forefinger both for shaking and knocking together. Nails secure the ends.
The rattles were sold to me by the craftsman, who stood by the path, demonstrating the sounds made by several different sizes of pairs, setting passersby in happy motion as he did. He himself was the most crippled person I have ever seen. His legs appeared to have no muscles; they were crossed and intertwined like a puzzle. He moved by pulling himself with his elbows. But he was in business, making his living by his craft—which was a matter of ingenuity, necessity, and survival. Tradition? There is certainly a deep tradition of percussion instruments in West Africa, but it is not a fixed one: anything that will make a sound will do. Reverence for materials isn't required; only creativity—openness to possibilities is required. 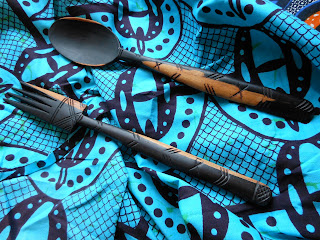 The hardwood serving utensils came from a small market run exclusively by artisans who considered themselves artists and who segregate themselves from the larger, busy markets where anything can be sold, whatever the quality. These utensils combine two types of hardwood, are carefully shaped, carved with traditional patterns, and were oiled to a lovely shine. At this market, all the artisans ply their crafts in the stalls from which they sell; it is important that their clients understand that they are not churning out indifferent tourist goods. 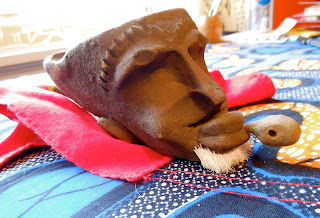 In their minds they are doing something significantly different from the fabricator of this ashtray that a friend gave me--another cherished gift. The clay used for this small item is essentially mud. I doubt that the artist purchased anything in order to make this; the animal hair is likely to have been trimmed from one of the many work horses around the city. Perhaps here we can make distinctions: Artisans from hand-crafters? Workers from dedication from those who labor from necessity? Levels of talent? I find it difficult to judge as lesser whoever fashioned this comfortable and colloquial old man. It's a different voice in different materials. 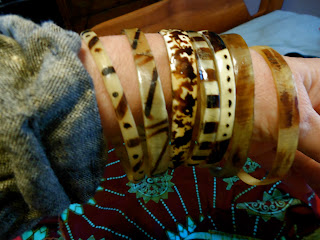 The horns of cows supply an inexpensive and beautiful material for the creative entrepreneurs of West Africa. I first encountered cow horn in the form of bracelets. Since the horn is conical, it can be sliced into many bangles of various widths, and of diameters from the tiny (toward the tip of the horn) to the large, heading farther toward the juncture with the skull. The bracelets are decorated with brown and black inks. No two are quite alike. They are beautiful but it's clear that little skill is required to make them. 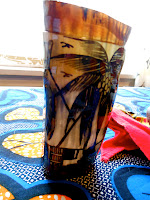 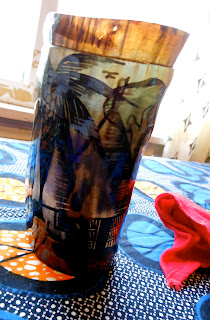 Horn is translucent, and can be used in genuinely artistic ways that feature the qualities of the material. A friend honored me with this exquisite small vessel, carved from horn in several thicknesses and, like the bangles, decorated with ink.

Senegalese artisans use natural materials: Horn, mud, gourds, seeds, seashells, wood, and hair are all very common. Jewelry is commonly seen for sale on the streets and on the beaches, and most is made from something that could be collected and strung, or something that could be fashioned into beads, like seed pods. The baobab tree has round, variegated brown seeds of about an inch in diameter, which are lovely as earrings or as an element in necklaces. 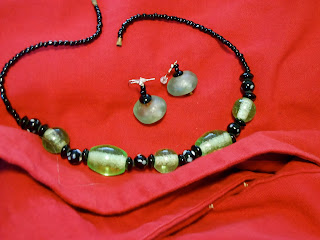 I was given a necklace and earrings in Dakar that are not made of natural materials, but recycled ones. The beads of the necklace are made of recycled beer bottle glass. The earrings are beads made from green bottle beach glass, roughened up in the surf. Beach glass and beach detritus are common, useful elements for Dakar artisans. 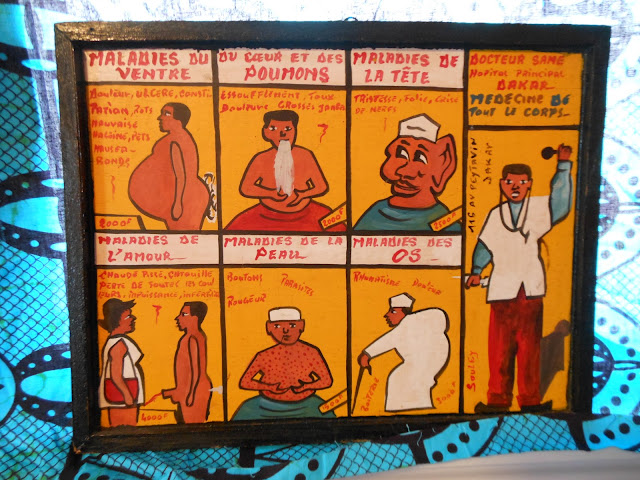 Hand-made goods certainly reflect an economy in which individuals have to find their own ways to make money, and the goods they make reflect openness to resources and ideas of what works. This painting, a sign—or shingle—to mark a general practice doctor's office, reminds us that in Senegal there remains a genuine, active relationship with pre-industrial ways. Many people still live in tribal villages and tribal languages are spoken widely, even though French is the official language. Though written in French, this sign indicates in pictures that the doctor will treat every sort of malady, from stomach and lungs and bones through venereal diseases. It's a hand-made sign, presumably for the office of a purveyor of remedies to people whose ideas about health are more traditional than scientific.

Dakar is famous for its abundant and excellent tailors. The central fabric market covers acres in the center of the city, and no neighborhood lacks several competing tailor shops. Hand-made clothing is the rule rather than the exception, even for common people.

The boubous (two-part dresses) pictured here are of polished cotton and other high-end fabrics, but most women wear wax cloth, a very durable cotton printed in dazzling colors and designs. A lot of this is manufactured for the African trade in England and Holland, but it is also made in West Africa, in Mali and Nigeria. Tie-dye, batik, and block-prints are the fashion. 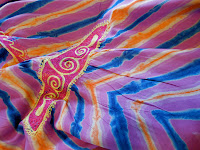 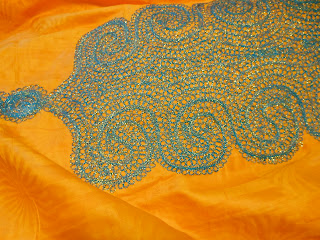 A tailor who sewed for me worked entirely without patterns, having been trained as an apprentice in his village. The most skilled tailor can be shown a picture of any garment and will reproduce it without further instruction. Ornamentation is highly prized. Tailors embroider on the sewing machine. The embroidery on the golden garment, right, was done free-hand for me by the same village tailor.

The idea of craft, precious in the West, has little of the reverential in Senegal. Craft is vital and day-to-day. Even when it's made for tourists, it's bouyant, unique, and provides the livelihood of it's untrained maker. The urban crafts of Dakar are rooted in necessity and functionality. The best of them can reach the level of art, but the ones I have seen—made from personal invention and fashioned from cow horn, seeds, and beach glass—don't approach the gasp of Do Not Touch or You Broke It, You Bought It.
Posted by STARR REVIEW, New Edition at 6:39 AM