Outside and Inside: A Look at Chad Sines


Showing through October 14 at the Ohio Art Council's Riffe Gallery in Columbus, Outside in Ohio, is an irresistible show of work by Ohio's untrained artists from the 19th century to the present moment. Mark Chepp, emeritus Director of the Springfield (Ohio) Museum of Art, curated the outstanding show.


"Outsider" is a term that still puzzles many—"You mean, 'folk art?'" It's puzzling because it's necessarily come to include many kinds of art that used to boil down to folk art. These days it refers to all sorts of things related by only one fact: The creators of the works were never formally trained as artists. They did not benefit from going to art school, auditing courses, or formal apprenticeships to others. True, the painter William Hawkins knew Elijah Pierce; Levent Isik got to know William Hawkins. All three of these have immense reputations, are the subject of monographs and articles, and their works fetch top dollar. But these were "outsiders" who knew one another and learned from one another. Don't ask me why this is different from their working side by side in a studio at the Art Institute, one master observing and consulting with another, but there you have it.

Outsiders, then, comprise many genres—folk art, memory art, the art of the insane or art brut, traditional crafts, etc. etc. But it also incorporates people working consciously within the mainstream of contemporary art trends without what they themselves see as the advantages of learning aided by teachers familiar with available materials, techniques, and tools.

Chad Sines is one in this latter group of people. His work in Outside in Ohio caught my eye at once: four paintings on different subjects that make an uncannily coherent show-within-a-show. Their palettes immediately relate them. Three of these are from 2010—Spiderman, Three-Toed Sloth, and Untitled (Elephants). Uncle Sam, the simplest, with red, white and black only, is from 2003, though it is thoughtfully hung directly above Three-Toed Sloth for an amusing comparison. The paintings are both 24 x 24 inches in size, and there is an ironic similarity of form and pose between the iconic embodiment of the United States and the blue-painted sloth. Uncle Sam lies splayed on his belly with his feet in the air; his face—his eyes and mouth especially—no more distinguished than the sloth's, his look as lidless and vacant. Each figure appears infantile, as a creature in a primary phase of development, figuring out how—or if—it will use its muscles. We know the sloth, of course, as the icon of an animal into which graceless indolence is programmed. But Uncle Sam? The figure of Might Makes Right? The image of national pride rocking like a tot on his tummy in what appears to be the get-up of a carnival barker is shocking: It's embarrassing but we can't help laughing behind our hands.

Sines made these, as he continues to make all of his paintings, with materials abandoned at construction sites. Uncle Sam, a painting of no inconsiderable intrigue, consists of very little, but Sines' gift is for getting a lot from a little. He mixes colors only where he represents the character's hair, beard—and the fur on his boots? What's that about? Since when does Uncle Sam wear fur-topped boots? Santa Claus does, though...So through this simple device, Sines adds another level of idea to complicate the worlds of meaning into which we dip as we consider this work. It also makes conspicuous the absence of blue.


The photograph of the whole painting obscures another feature that's very evident in person, this being that the red paint is glossy, the white and black are matte, so there is the interest of surface contrast to spur our imaginations too. Uncle Sam in satin, fur, and a big bow tie? A figure from a minstrel show or burlesque? Does this suggest that his pose is that of a comic taking a prat fall?


Sines allows his paint to drip and blur; his brushwork is casual; he demonstrates no interest at all in finesse or technique—unless we understand him to be a smart painter who is deeply aware of folk and outsider art traditions and knows how to use them to convey what he's interested in doing. He invites us to assume that we are dealing with primitive or naive material by the way he presents Uncle Sam,  but the image is, if you look carefully, no more primitive than you allow your own thinking about it to be. I think he makes this point even in the way he signs and titles the painting in lettering of equal size and weight. Given the many ambiguities and curiosities in the presentation of the figure, must we accept that one or the other of those painted names describes the subject? Is it really more definitively Uncle Sam than Chad Sines?

Both Uncle Sam and Three-Toed Sloth live right on the surface. There's no reason to wonder what's going on underneath. In the painting of the sloth, in fact, the large, flat  gray area that surround the sloth works two ways: Because of a possible trunk at the bottom, it probably represents the tree the animal lives in. But because the paint is applied without any differentiation of shade or texture, it also appears to be an effacement of whatever lies behind—it's not a representation, but a block that prevents our seeing anything that might add depth to so emphatically two-dimensional a vision. 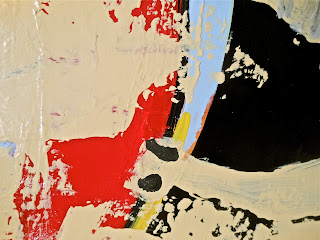 In 2010's Untitled and Spiderman, Sines gives us lots of action both on and beneath the surface. He still withholds the normal visual hints about spatial placement, though. Where we expect white to indicate closeness and black to create distance, the colors are simply design elements like the others in this composition. While he describes two (one-and-a-half?) elephants among the shapes here, it's an open question whether he had elephants at all in mind when he started, or whether they emerged and fueled a finishing idea: I think the latter is more likely. In this work we see Sines' interest in the painting process. He's left his history in thin layers that expose their predecessors, colors and dimension both. There are brush strokes still visible, and we can look into the chronology that allowed him to keep his few colors unmixed as he left time for them to dry—and for him to look and ponder—between application of  layers. This is basically a non-representational painting with an ironic commentary applied. What's the use of abstraction? seems to be a tongue-in-cheek question, the elephant in the room. 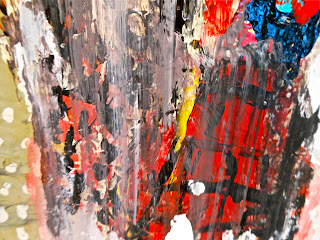 Spiderman is also spatially mysterious. This may be because the painting, composed around the large figure in an iconic, dynamic, descending pose, shows us a Spiderman whose reality appears to be the central question of the piece. Once again, as in Untitled, we can't count on the disposition of dark and light areas in certain quantities to give us our bearings. Where the greatest patch of pure white lies, in the lower right, it appears to recede: This is where Spiderman is supposed to be popping forward toward us, out of the mists of our need. That we perceive his forward motion is due to Sines' use of black outlining, which gives the figure definition and propels that right arm, the strong jaw, and bullet-shaped head forward—and away from the background. That would be the "real" Spiderman, but then he dissolves at what might be his strongest point, the fist, the point of the missile, which is a beautiful mess of mixed paints with lines and dots, perhaps not a representation of anything at all. 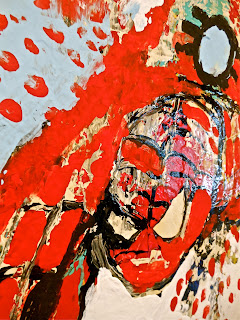 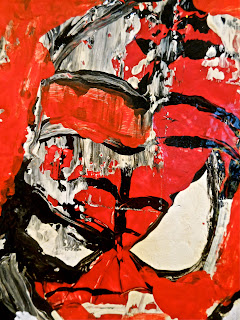 In fact, over most of the surface, the figure coalesces rather than presents itself in defined form. Those relatively few black lines have a disproportionate impact, once you get into the details and note that the left side of the form has only a blurry edge at best, and that the face, on close inspection, is really composed as much of our expectations of the icon as it is by the bare hints Sines has actually committed to paint. What's there is a series of attacks and effacements, splatters and revisions that convey just enough information for us to surmise, from everything given, that this is Spiderman's face.

That Chad Sines' wonderful paintings are in Outside in Ohio is an excellent example of the breadth and inclusiveness of the term "outsider." Outsider art that you'll see in a gallery or show, even at its most naive in appearance, is always great art: There would be no reason to care about any art that didn't compel us with its mutually supporting technical finesse and human insight.

Sines, though, is an interesting case in labeling. He's always wanted to be a painter, even from childhood, despite the unpromising visual and cultural environment in which he grew up. When he graduated from high school in Newark, Ohio, in 1993, he had been highly praised in his art classes, had work accepted and a prize awarded to him in the Governor's Show. He was admitted to art schools, but a DUI (drunk driving citation) and probation immediately after graduation impeded his plans. He married young, had two children, and worked two jobs to support his family and send his wife to college; but he managed to paint through it all, collecting scrap wood and paints from the construction sites he worked. He never made it himself to any sort of higher education until after divorce, when he enrolled at Ohio State.

Sines had a student job working at the Wexner Center for the Arts, in the bookstore. He used the books as a library in slow times and increased his art literacy in contemporary art to overcome the minimal background he was aware of. Today he's finishing his degree in sculpture at the University of Kentucky. "I didn't want to study painting," he told me, "because I like what I'm doing. But I keep wanting to add to it. I know there are things I could be doing with other media. I really wanted welding and practical knowledge of fabricating. I want to build a bigger, better body of work."

Sines is indeed a very practical artist. He works hard with what he can get in the life circumstances he has. He's never lacked ambition or seriousness about either his work or the career he wants; he's comfortable saying out loud that his goal is to make it into the Whitney Biennial. His current portfolio is a Saatchi Online Profile, accessible by searching "Artist Chad Sines."

I like the perspective Sines' trajectory gives me on my own, ongoing debate about the value of art school training. I'm a skeptic, but Sines makes a solid point for the practicality of going to learn processes and techniques it would be otherwise difficult or tedious to master. And it's certainly the place to learn how people negotiate the for-profit art world. Glancing through Sines' on-line portfolio (never the way to see work), I'll admit that I like the Riffe Gallery's Outsider Sines better. But Outsider Sines wasn't a student, and to be a student is to sort through a huge menu of possibilities and choices; of having before you the whole great world of errors to commit and having enough information to make them. Insider Sines, going this route, will take a while to educate himself, which is a process of making everything hyper-conscious. I hope he will regain eventually the ease of expression and depth of insight shown so convincingly by Outsider Sines.


Posted by STARR REVIEW, New Edition at 9:00 AM