What amazed me the most in my heady tour of the newly redesigned African galleries at the Indianapolis Museum of Art—and there is so much competition in the astonishment department!—is that so much of the collection dates from the twentieth century.

"But wait!" I think. Artifacts from far away; things that look so strange (read: "primitive") must be old. They are centuries, eons away from our world view. Aren't we used to visiting museums to find the past preserved?
The core of the outstanding Indianapolis collection was the 1989 gift of Indiana businessman Harrison Eiteljorg (1903-1997). He and his wife donated over 1,200 works to the IMA. The museum has built further on the Eiteljorg collection with acquisitions and gifts that make it now one of the nation's premier sites for African art, with outstanding pieces representing all areas of the continent. It's also large enough that it's able to be presented thematically, emphasizing such topics as body adornment, relationships to ancestors, power, and royal arts.
I explored with the simplest questions in mind: "What is this thing? What's it for?"  For I find it staggering that nearly all the intricate, highly decorated, beautifully crafted things in the collection are three-dimensional pieces of functional art.  Almost nothing in the gallery, however imaginative or formally ingenious, fails to serve a purpose. However astonished I found myself, however gratified my imagination, everything was still firmly planted in modern or contemporary reality. This headpiece in the form of a crocodile was used by Niger River Delta men's associations in their practices because predatory animals are considered guardian spirits. 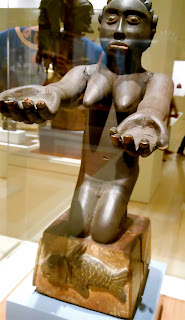 I loved these two realistic, female forms with their empty, outstretched hands, the one standing, the other kneeling on a base with a fish, as if by a riverside awkwardly depicted by a carver. Too beautifully modeled to be beggars, perhaps they were religious suppliants, I wondered? Quite the opposite, the notes informed me: They are deities. For some people, it is quite natural that they look exactly like human women. The standing figure apparently would be kept in a shrine. Her image is thought to protect and heal those who make sacrifices to her. The kneeling water deity expects to have her hands filled with offerings.

In the 20th century African exhibit, the lines we in the West draw so sharply between human, animal, and spirit are broken at best. But I found myself thinking after a while that they weren't perhaps so strange to anyone who has read books to children who are learning about the forces of the world, in nature and in themselves.

This extraordinary head crest made by the Efik people of Nigeria left me completely agape with its weirdness and beauty. The tough extravagance of the hide-wrapped horns that grow from this small head exquisitely inlaid with marquetry designs makes it hard to believe one's eyes. A label suggests that this represents a "spiraling hairstyle." My own reaction though, made me laugh remembering David Small's book that my children and I loved, Imogene's Antlers. It's the story of a girl who wakes up one morning to find that she's sprouted an antler rack of stunning size, and that it's real. She takes it in stride, leaving those around her to find ways to cope. In the Museum, we can elect to be either Imogene or her fainting mother, appalled by the very sight. 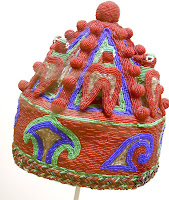 A men's association from Cameroon used the guise of an elephant when they worked under royal blessing to keep the peace. Despite the enormous pendulous trunk, this pachyderm mask nevertheless sports a human nose, suggesting to me a genial and perhaps unconscious blending of the gifts of wisdom and succor found in both species. Atop a Yoruba royal head in Nigeria, little white-eyed, birds rest among big, red, beaded berries, demonstrating regal pomp in a manner unusual to eyes accustomed to diamonds set for their own sake. 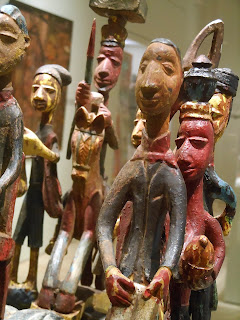 A Yoruba men's society fashioned a phenomenal headdress in the early 20th century, the Magbo Society Mask. The Magbo Society enforces community penalties but also insures burial for every member of the society, regardless of rank or wealth. The mask, therefore, is decorated with thirteen figures that represent the many kinds of people that constitute the community: a soldier, a farmer, musician, and nursing mother among them.


Hinge-jawed masks from the Ogoni people of Nigeria are character studies that focus on unique features and attitudes. A cap mask from Cameroon, made of wood, pigment, shells, hair and various fibers, has no realistic features, but to the people who made it, it clearly represents a king: Note the beard and the extravagant use of prized cowrie shells.


One of Harrison Eiteljorg's most beloved objects was a mask from the We people of the Ivory Coast, composed of wood and cloth, nails, shells, used cartridges, leopard teeth, porcupine quills, fur, pigment, and on and on. Were it not in a case but still in the world, each generation would add yet more to it, for the idea is that such a mask enters the world as a piece of wood that accretes offerings forever, gaining potency with each generation's enhancements. The idea is that it embodies forest spirits that become accessible through dreams. It could have been a model for Maurice Sendak's wild things, a sort of benign, protective terror.


For me, the Eiteljorg African galleries are a wonderland where the real world of a century we've just left is treated with joy and reverence; where nature and humankind are presented in myriad ways, each one observant, penetrating, and packed with meaning. The abundance of points of view, the multitude of solutions to the same practical and design problems (how to make a pipe; how to indicate the presence of royalty) fill me with the delight of pure abundance.


I live in an efficient world, thrifty of its media, thrifty in its aesthetics. Culturally, we agree on little, so symbolism isn't a normal or potent mode for much communication. The use of disguises and personae are either illegal or appear silly. We are literal-minded enough to think that one must live either with theology or atheism. We do not see the world as a dynamic, nuanced, wondrous place that is our habitat, rather than our dominion.


The innumerable worlds of Africa merely hinted at within these rooms in Indianapolis make this viewer long not only for modern Africa, but for the the world I never notice around me for lack attention and imagination—how it sifts and drifts around me, perhaps changing form and color, animated with wonder back behind the squawk of the alarm clock and the aggravating sequence of traffic lights.


Photographs by the author of materials on display in the Eiteljorg Galleries of the Indianapolis Museum of Art.